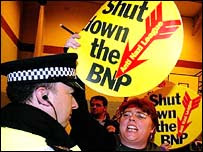 I've seen the BNP list. God bless America. Whilst the UK media remain cryptic about where it is available, US newspapers openly provided links.


What value to the debate can I add with this posting? Well, it seems that Suffolk has plenty of BNP supporters and by that list its numbers are concentrated in Ipswich, Lowestoft, Haverhill and none are recorded in Southwold and Aldeburgh but there are two in the Halesworth area. In my opinion, that apparently follows the economic advantage within these communities too.

I once interviewed Nick Griffin and had to go through a very tiresome interview with his spokesman to do so. I asked him about growing up in his former home of Halesworth and given his ties to the area, I'm not surprised that a BNP 'activist' is reputedly still living here.

I know there are also plenty of ultra-green and ultra-left political activists around these same towns and this need not concern our guardians of the peace. I doubt anyone will be torching cars in Suffolk because of politics.

Like Voltaire (supposedly), I don't agree with their politics myself but I must defend their freedom to engage in politics without fear of anything more than heckling.

Some bloggers suggested that the leak was orchestrated by the BNP to gain sympathy for the party to show it's not a bunch of skinheads. It appears now it was by disgruntled ex-members but Nick Griffin acknowledged there were some benefits to the party's reputation from it happening.

It's an invasion of privacy and as much as I support free speech, I can't support anyone having the right to steal such lists and put them on the internet but I think it's also well deserved poetic justice.

For years some people in the far right have maintained their own lists of 'enemies' on the internet. http://news.bbc.co.uk/1/hi/uk/3544095.stm The host domain of 'Redwatch' was registered to the National Front and you get into a quagmire of political history whether the NF is the same as the BNP.

I know people who are willing to document the activities of right-wing political parties are on them and have had to take security precautions ever since as a consequence of threats from that quarter.

I guess, in time, the results of any investigation will be buried under attention another story and the matter will blow over. Or not.
Posted by Nat Bocking at 23:28 No comments: Links to this post 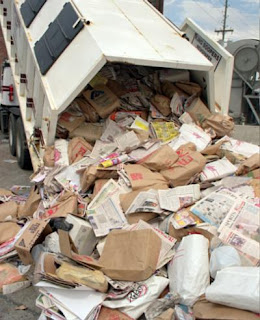 Did you know that one piece of office paper, for example 80gsm A4, uses 600ml water and creates 34g of CO2 and 2.4g landfill waste in its lifetime?

That figure is pretty hard to come by which is part of the problem.

My figures came from Australia and when I looked into others from the USA, the claim for another paper was for 8g carbon per letter sheet.

I suppose Australia has to import more of its wood pulp and it depends on where you're counting, whether at the mill or when delivered to the user as all those miles on trucks must make a difference and stuff like bond for letterheads must take more energy to make than plain copier paper.

Let's just go with the high figure for now as I hope to show it's not just the CO2 that matters. If each sheet of plain copier paper represents seven times its weight in carbon emissions, that means every 500 sheets of plain white paper is 17 kg of CO2.

Now add to that, that over its lifetime, the manufacture of a typical office printer and its consumables creates 110 kg of CO2 per year. A big photocopier/network printer creates vastly more but is hopefully more efficient per page.

The electricity used by a small office printer on standby (mine at least) emits at least another 200 kg CO2 per year.

In the USA the average office worker uses 10,000 sheets of paper per year.

Combined with envelopes, that could be a tonne (1000kg) of carbon emissions per worker, per year.

One of my employers has measured the carbon emissions from the office lighting and heating alone at 350 tonnes per year. They haven’t counted the paper use yet but we're going to and it could be very scary. Lots of organisations like ours admit in their public carbon reports that it is very hard to do this and depends wholly on the suppliers' estimates. Addendum: our main copier paper is Evolve Office 80gsm which is 100% recycled and the data from the mill (in Kent) says the CO2 emission in its production is 728kg per tonne. I reckon that's 3.64g per sheet but then there's the shipping to the warehouse and delivery too.

"But we use recycled paper in our copier and for all our literature" I hear the MD chime in. Not that they need to defend the organisation as it has just installed a biomass boiler and committed to a whole list of actions after a Carbon Trust audit. We didn't do that just for the brownie points, although there are some, but because it saves money. Large organisations are being required to establish their carbon baselines by 2012 so everyone's getting quite interested in carbon accounting now, at least I hope so. If they can find their carbon footprint now they'll know what kind of target reduction is possible and what it will cost when they are forced to act.

But when all that's done, where's the next round of carbon reduction going to come from? Then I think it's going to get really interesting. I think managers would rather install a fancy thermostat at twice the price of enforcing changes in employee behaviour because a thermostat doesn't complain when told what to do.

Using recycled paper is a good thing. Recycled paper saves trees but carbon is still emitted from the energy required to process it. A tonne of virgin pulp creates roughly 2.1 tonnes of CO2 emission. One tonne of recycled pulp causes 1.86 tonnes of CO2 emission. But everyone must cut consumption as well as recycle. Paper is the third greatest source of industrial carbon emissions.

My employer hasn't measured the cost and volume of the paper it uses yet because that requires data entry from stacks of invoices by hand but it's working on getting it done. Maybe suppliers could help by formatting their invoices better to enable that?

Apart from the carbon issue, our paper use is a high priority because the cost of paper these days gives enough incentive. Although everyone wants to reduce the charity's carbon footprint, allocating resources to do that has to be considered mostly on a financial basis. Our new heating controls will cost £8000 to install and will save 30 tonnes of CO2 annually but businesses will only do such things - until there are carbon quotas - because the cost can be paid back in energy savings in 2.5 years.

My low-end guestimate puts providing my co-workers' paper and electricity and printers at around 6 pence a sheet. There's a handy bit of software by which you can log network printing and charge it to clients called Papercut* (and it's free for up to five users) which can count the paper and printers used and so you can count the carbon value of your printing.

If everyone where I work reduced their paper consumption by 1000 copies, I reckon the bottom line would be improved by enough to raise wages 1%. That's a pretty good incentive besides the carbon impact.

Saving paper saves the bottom line which also means for grant supported organisations like mine that jobs can be funded for longer. So save paper = save the planet = save your job.

Some habits that can reduce the waste of office paper:

*note to Papercut: Wouldn't it be great if there was a widget in your printer dialogue box that popped up and said "you are about to emit .... kg of CO2. Do you really need to do this?"

A great explanation of the production cycle http://www.storyofstuff.com/

Posted by Nat Bocking at 19:23 2 comments: Links to this post 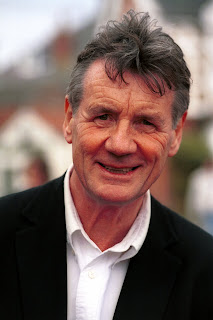 My little corner of Suffolk never seems to be out of the papers for very long. What with Gordon Brown lately spending his holidays in Wangford and Bernard Matthews in Holton getting bird flu.

Like the swallows returning to San Juan Capistrano, I don't consider spring to have really come until I see the first story of the year about the price of beach huts in Southwold.

I have developed a theory how this story is a perennial. It's because when journalists visit Suffolk at half-term with their families, they need an expedient excuse to claim some travel expenses so they file this story. Or they need something they can file quickly so they can fill their column and have more time with their families instead of digging (metaphorically) for something substantial. It's easy story to do, you only need look in the estate agent's shop window and there's no end of people willing to supply a quote for a plug. Cynical perhaps but then I've done it myself. Every time the story never fails to mention the celebrities that populate the area.

And lately, even though this autumn feels like its winter already, there's been no shortage of celebrity sightings. Just before bonfire night I saw Richard Curtis on his bike in Southwold High Street and walking along the seafront at Southwold, who should emerge from the grey mist but Will Self and his dogs.

These names aren't secrets, anyone could find these out on Google and no particular order, these are the celebrities most frequently associated with this part of north east Suffolk:

There are plenty more associated with Aldeburgh too.

Trevor Nunn was born in Ipswich but I don't know if he's ever come back.

Not living or second-homing in Suffolk (to my knowledge) but often seen:

Posted by Nat Bocking at 14:18 No comments: Links to this post