Recently Norwich's papers reported that plans are afoot to improve Norwich's riverside, a mainly underutilised area which I also think is full of potential. The EDP reported that "Norwich HEART and the Norwich Society are commissioning researchers to look at how part of the river at the back of the Playhouse Theatre could be opened up to pedestrians..."  I took up their invitation to make suggestions:

I came to love this part of Norwich when I was a student at Norwich University College of the Arts and so I think this institution holds the key to making an enormous difference to the usability of the riverside. If NUCA would allow a public right of way through one of its buildings, which would require extensive but not impossible modifications; given what has been spent on the area already, this action would magnify the benefits of that effort ten-fold. 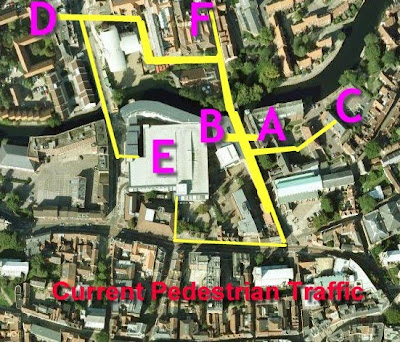 NUCA is spread over several buildings either side of St George's Street which has recently been pedestrianised to link Cinema City to the Norwich Playhouse with the college and many cafes and bars in-between.

During the day St Georges Street is just as the planners had wished for; a hive of activity with students and office workers from Pricewaterhouse Coopers, Balloon Dog and many other firms mingling and milling around. During lunchtimes they frequent the many cafes either side of the bridge and incidentally, the coffee stand at the foot of the bridge serves the best cappucino in Norwich. 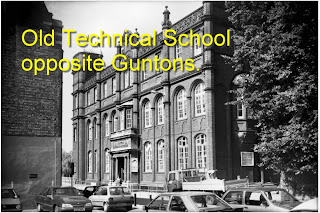 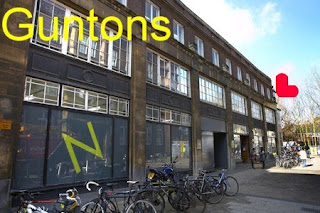 On the east side of St George's is (A) the main Technical School building which still houses the bulk of the college and opposite on its west side is (B) a building called Guntons which houses workshops and further teaching space.

Behind the Technical School building on the east side is a courtyard in which are located (C) the graduate centre The Monastery and the NUCA Student Union.

Further to the west, on Duke Street, is (D) the new NUCA Learning Centre or student library.

From my experience, on a typical day, many students will traipse from the Learning Centre to the Monastery and back again several times.

The problem is, the most direct access from the hub of St George's street to the Learning Centre and (E) the St Andrews Car Park (Norwich's biggest) is either by Duke Street or by St Andrews Street, which are indirect routes, especially if you are heading for one of the many office buildings south of the river.

But when you come out of St Andrew's car park on Duke Street and want to go northeast towards St George's, there is an inviting riverside path on the south bank heading towards NUCA but alas this riverside path dead-ends at the back of the Guntons building.

If only there was a way through Guntons to St George's, then many hundreds, perhaps thousands, of people per day would not have to negotiate the pedestrian-unfriendly car park beside the Pricewaterhouse Coopers LLP buildings (located behind the Premier Inn on Duke Street) on the north side to get to St George's Street and the Norwich Playhouse and its nearby cafes and bars. 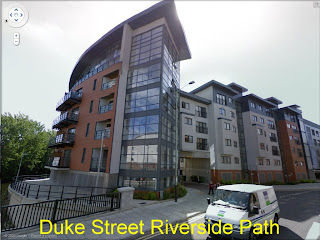 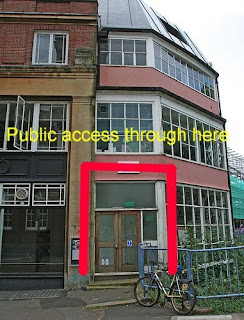 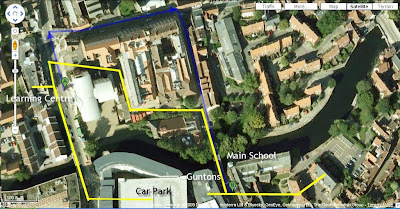 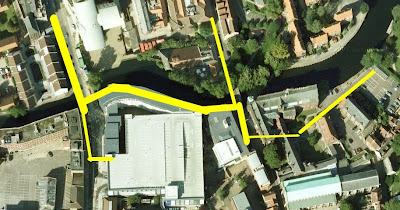 The solution I propose is that the path blocked by the Guntons building should be extended through Guntons so that it would  carry the foot traffic that now walks through the PWC car park.

This would both give much better access to St George's Street from the St Andrews Parking structure and connect the riverside walkways either side of St George's Bridge together.

Then you could walk from Duke Street to the Cow Tower on along the south bank of the Wensum with a short diversion through the historic and interesting couryard of the Monastery behind the technical school.

The part of the Guntons building on the riverfront itself looks to be a later addition to the main building and it would not be of any significant architectural loss if doors were made in its back wall that faces a parking structure. This passageway, facing the river, would also overlook the Norwich Playhouse and with its industrial glazing and ironwork façade, it could be made into a very attractive space.


I sent my suggestion to HEART and this is their response.


Thank you for your suggestions in relation to the Parkway project. You won’t be surprised to hear that you haven’t been the first to suggest this. We will be assessing a range of options and are likely to be in a position by next Spring to move something forward.

Best regards and thanks for your interest.

My apologies to Google for using their images. I intend to replace them with hotlinks to their live maps as soon as I have worked out how to do it.