Recently, from somewhere in my subconscious, a memory welled up again of being the tender age of eleven years old and in Ottawa in the depths of winter. I was staying with my aunt Jo-Jo in a large tower block that - rather than having the associations we might make in Britain with urban deprivation - was an exciting vertical village playground. On different floors were activities like yoga schools and art clubs and the 'Kitchen Cinq'; a coffee shop with an exotic clientele of pimps, hippies, US draft-dodgers, spooks, squares, gay and straight young people, both black, white and Inuit, (exotic to me even if I was from multicultural Britain) where every wall had been turned into someone's canvas.


I recall now that I kept a souvenir, since lost, for my holiday scrapbook of its brochure with grainy documentary style black and white photos of bearded young people with a cover in a 70's typeface so I never forgot the name. This was then the Pestalozzi College, a co-operative student housing scheme but considered a den of inequity rife with drug use by the city police and health departments, known as "The Pest" by the locals. A more sinister reputation was with the RCMP for being headquarters for Quebec Separatists, Maoists and Marxists. According to the Security Service, one of the 'college' founders was an apostle of the 'New Left' in Canada; Dr. Jon Alexander, an American professor of Political Science at Carleton University, who was then being kept under constant surveillance. 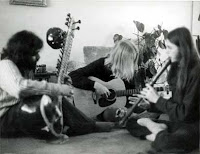 There certainly were acquaintances smoking funny cigarettes but my memory contains no witness statement to anything specific, just awe that wandering around a building could be fun. After all, it was below zero outside and music seemed to be coming out of every room and I was left to explore it on my own. The whistleblower Bernard Payeur was living there at the time:


It was the layout of the apartments that made Pestalozzi special and made the rent affordable. Most apartments consisted of three or four small spartanly furnished bedrooms: a bunk bed with pull-out drawers, a closet and a desk. In some configurations, you had two or three small bedrooms and one large bedroom with two bunk beds, two desks and one closet. The bedrooms opened onto a central living and dining area. Depending on the number of bedrooms, you shared one or two bathrooms.
Unless you went to Pestalozzi as a group, you had no idea who your communal companions would be.

At the end of corridors on random floors were open rooms with picture windows for views over frozen rivers and the Houses of Parliament. In one place could be a pile of bean bags and some books. Another might be a gallery for sculptures or you'd find a dance class in progress. Jo-Jo was my mother's younger sister and a 'liberated' woman and very advanced for her tender age of seventeen; to me she was an older sister who let me into the secrets of what I too might expect to enjoy as a teenager. She had a lava lamp and burned joss sticks in her bedroom and had a boyfriend with a Harley. She let me read my first underground comics and she took me to a record store to buy my first LP, one of Alice Cooper's failures, and also to McDonald's for my first Big Mac. Only the latter I consider to be a corrupting influence.

A defunct website languishing in the Google cache tells me: 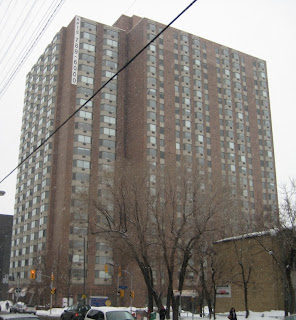 
Looking at the unassuming apartment complex now, who would’ve known that a college once existed here at 160 Chapel Street? Known as the “People’s University,” Pestalozzi College was a student-run cooperative residence that existed in the late 1960s and into the 70s as a free-thinking, open-concept school, based on the model of Toronto’s infamous student-run Rochdale College. Some of the extracurricular activities that occurred in the building included literary readings and the Ontario Provincial Gay Liberation Conference in 1973 as well as Ottawa’s first public gay dance, hosted by GO (Gays of Ottawa, who also had their headquarters there). Existing as an alternative school, the entire building was a strange mix of open education, residence, and “free love and good drugs” that eventually fell apart in much the same way that Rochdale did. By the late 1970s, both school and building existed as a community centre of sorts, offering facilities for artists’ studios and yoga classes before the entire building (with very little notice) was converted by its owners into an apartment complex, Horizon Towers. A holdover from the Pestalozzi days, the Sitar Indian Restaurant on the ground floor still exists (417 Rideau St., 789-7979).


Further reading around the web confirms the place had an enormous cultural influence in Canada. Beside its role in gay liberation; scores of poets, artists, teachers, dancers, musicians, greens, activists and other visionaries cite it as an Alma mater. Now so do I.

A photo caption in the Corbis archive (don't sue me o.k., this is fair use) explains why it never figured in my life afterwards. I guess the notion of paying rent or having someone collect it was just a bit too "heavy". However, given how it facilitated the basic sustenance of a large range of radicals, it could have easily been targeted for CSIS 'disturbance' activity.

Pestalozzi College's failure to meet its mortgage obligations spells the end of this type of government-funded student-run operation. Pestalozzi, completed in April 1971, echoes that of Toronto's Rochdale College's almost two years ago. After falling more than $400,000 in arrears, Rochdale reverted to CMHC. Central Mortgage and Housing Corporations (CMHC) filed a writ in the Ontario Supreme Court November 7, to foreclose on the college and put it in receivership. November 8, 1972.


In 1997 the building had a $25 million refurbishment which ripped out internal walls and converted it into luxury apartments.
Posted by Nat Bocking at 15:46 No comments: