olmsted.jpg
Originally uploaded by pixlink
Ahh, the mysteries of life. Many are found in 'Found' magazine. http://www.foundmagazine.com/


I bought a wedding album in a thrift store in Los Angeles in 1991. It's titled 'Candid Studies of the Olmsted-Dougherty wedding by the Curtis Studios' in hand-painted calligraphy on the cover (who can do that now?)

Judging from the cars and the clothes, it could be 1940 ~ 1950 in California probably, the church is Mission style, the reception looks to be at a smart country club or mansion. Most of the people look well off and there's loads of stunning dames and handsome guys, some are in uniform.

I paid the LA Times £50 to search for a wedding announcement but they didn't find it. The photographer Edward S. Curtis traded as 'The Curtis Studio' from the Biltmore Hotel, Los Angeles. Could this be by one of his employees or successors? Curtis himself would have been in his 70's or 80's by then.

If this family is yours, please get in touch. The one above is one of many and the last photo in the album below is of the photographer with his Speed Graphic. I think the person with him is a photographer too, that looks suspiciously like a 5x4 slide in his pocket. 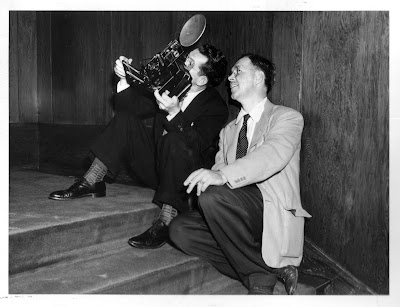 According to members of Facebook group 'Hidden Los Angeles', this is the wedding album of Louise Olmstead and William Howard Dougherty. They were married on August 3, 1940 in Westwood Hills at the Church of St. Paul the Apostle. She was the daughter of Mr. & Mrs. Clarence Edward Olmstead of (New York, formerly of Los Angeles). He was the son of Mr. & Mrs. Frank Clarke of Pasadena. Engagement announced on in March 29, 1940 LA Times. Wedding announcement in the August 3, 1940 LA Times.
I should ask the LA Times for a refund if it was in there all along.
Posted by Nat Bocking at 09:46 4 comments: